Ottawa City Council approved the Urban Forest Management Plan on 28 June 2017.  The OSC will be a member of the new External Urban Forest Working Group to help the City implement the plan, and is a named partner in three of the Plan’s recommendations:

– #22 – Expand community engagement, public education, and marketing of urban forestry,
– #23 – Develop and implement an urban forest outreach and engagement strategy, and
– #25 – Promote and facilitate the development and implementation of Neighbourhood Stewardship Plans.

We expect to begin working with the city in late fall 2017.  We are looking for people who are interested in helping us carry out a number of UFMP initiatives:

Neighbourhood Stewardship – If your neighbourhood is interested in participating in tree stewardship programs for public and/or private space, we’d like to work with you.

The Ottawa Stewardship Council submitted comments in December 2015 and November 2016.  Below are the major points from our 2015 submission.  You can find our 2016 Comments on the Draft UFMP here.

We are Canada’s Capital and the vision for our urban forest should be an inspiration to the rest of the country. We have a unique combination of ecological assets in Ottawa: multiple rivers and a heritage canal, diverse green spaces, national monuments, a federally owned green belt and river corridor, and a highly educated, prosperous citizenship.  Urban Ottawa is surrounded by rural and wild natural areas perched on the iconic Canadian Shield within the city’s limits.

The urban forest vision needs to consider the broader green and blue infrastructure of “Green Ottawa”; it cannot be developed in isolation. It should be informed by the City’s conservation plan and must showcase “riparian Ottawa” and its ribbons of life along the many river corridors: Ottawa River, Rideau River, Mississippi River, South Nation River, Jock River, Carp River. New approaches to planning such as Low Impact Development need to be integrated with forest management in new developments to create a mosaic of green spaces rather than centralized storm water management features and isolated parks.

We need cooperation with the federal government through the National Capital Commission (NCC), whose land holdings are a dominant feature in Ottawa. We also need cooperation with the province for lands such as hydro corridors that are currently underutilized and offer opportunities for greening with native shrub species and/or community gardens like the one in Kanata North.

Here are some thoughts on how the vision for the urban forest could be framed.

The vision for the urban forest must be underpinned by a measureable set of specific goals with timelines.

We need to address the barriers that will hinder success:

Insufficient Resources. Existing budget challenges and overworked staff will make an ambitious vision difficult for the City to carry out. The City should consider mobilizing “free resources” to make this program a success.  A structured and organized use of “citizen scientists” and community organizations should be built into the implementation of the plan. In addition to saving staff time and money, mobilizing volunteers creates an engaged citizenry working in partnership with the City. The City should take advantage of Ottawa’s highly educated population with its many retired and energetic experts. One example: the City needs to complete an inventory of its forests. This task can be accomplished by the local field naturalist groups such as the Ottawa Field Naturalist Club, which is the largest (over 700 members) and oldest in Canada.

Green Infrastructure Metrics. Numerous, recent studies have put numbers to the physical, environmental, and mental health benefits of green infrastructure in urban areas. These metrics need to be considered in return on investment (ROI) analyses when planning for new developments, road upgrades, other infrastructure replacement, and neighbourhood renewal.

Densification. The laudable goal of increasing density within the urban boundary is at odds with maintaining a healthy tree canopy, much less increasing it. Densification at the expense of green space will have health and social impacts when we create urban deserts (see EcoHealth Ontario resources for studies). For example, lack of green space shows notable correlation to increased crime, aggression and mental health problems. Incorporating green space metrics in ROI analyses should lead to better densification decisions. Tradeoffs and creative approaches need to be considered.

Inter-department Coordination. The lack of inter-department coordination within the City was mentioned multiple times as an inhibitor to effective implementation of urban forest management. Decisions made in planning or for permits are not consistent with good forestry practices.

Public Engagement. The City will need to appeal to residence and business owners through self-interest and civic pride. Many people will not care or have the time, but even doubling or tripling the number who are engaged (say to 15% or 20% of the population) will have a positive impact and provide “free resources”. Soft approaches include:

Schools are an untapped resource. There are number of high schools that provide an environmental studies stream. Students could be involved in the collection and planting of locally sourced seeds. The seedlings could be provided free to the public or used by the City to replant public spaces. (See Wellington Green Legacy Program for a successful example of this program.)

The Ottawa Stewardship Council has partnered with two high schools with environmental studies programs to care for city owned woodlots adjacent to the schoolyards. With guidance from a city staff forester, we have carried out a bio-inventory, planted trees, removed invasive species, and installed interpretative signs, all without any funding from the City. Long term stewardship of the woodlots will be the responsibility of the schools, who will provide ecological information to the City about the continuing health of the forests. This model could be replicated for other natural areas throughout the city.

Federal Government Cooperation.  While cooperation with the federal government is not essential for Ottawa to implement an inspiring vision for its urban forest, it would certainly make for a more environmentally significant and compelling plan befitting of the nation’s capital. 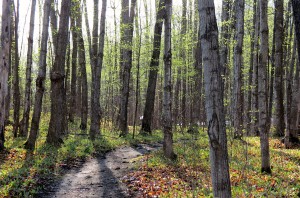 Plant for Biodiversity. The focus on trees in all the communications sends a singular message that many people will misinterpret. While the benefits of mature street trees and backyard trees are not in dispute, creating a healthy environment for insects, birds, and the rest of the food chain requires that native shrubs and plants also be planted wherever possible. Indeed the selection of shrubs may be a better choice than trees for some spaces and improve survivability since many trees cannot adapt to urban street conditions. Large shrubs such as Serviceberry or Viburnum can grow to the size of a small tree while providing flowers for pollinators and fruit for animals.

The changing climate envelope must also be considered by planting some southerly species to make the biodiversity portfolio more resilient. The target species composition may change over time as certain species are affected by non-native species competition, new pathogens, pollinator losses, or other effects of climate change.

Prioritize For Impact. Studies have shown that access to green space has a significant and positive impact on children in low income areas. The City should consider prioritizing green space rehabilitation in these areas particularly where it is below standard.

Empty Space is an Opportunity. Look for opportunities to plant “empty” or under-utilized spaces: hydro corridors, schoolyards, street medians, parking lots, etc. It was suggested that citizens could be engaged by identifying these spaces for the City.

Certified Tree Stewards. The City should ask one of the environmental groups (perhaps Tree Ottawa) to start an Ottawa Tree Stewards group, which would provide training and certification to volunteers to care for the city’s trees. The Arlington, Virginia Tree Stewards group performs the following functions for their city:

Note that significant training and volunteer hours are required before becoming a Tree Steward. The web site is worth reviewing: http://treestewards.org/about/

Notable Trees. Nominated by citizens, trees with special character (e.g. size, age, outstanding specimens) on public land in urban and rural areas can be identified and described on the City’s web site, allowing people to “go on a tour” around Ottawa. Privately owned trees could be considered too with the owner’s permission; e.g. the Champlain Oaks. The City of Williamsburg, Virginia has a special web page (http://www.williamsburgva.gov/Index.aspx?page=930) with an interactive map that describes its heritage trees, specimen trees, special street trees, and champion trees. Perhaps Tree Ottawa could coordinate this project, which raises awareness and increase public engagement.

Enforce and Strengthen the Bylaws. Review bylaws to ensure adequate protection for trees, including sufficient penalties that will deter deliberate destruction particularly in new development areas.

Integrated Forest Plan with Rural Ottawa. The urban boundary is both ecologically artificial and moving outward. A vision and plan for what the greater forest will be in 20 years, 50 years, and 100 years from now must be developed, not addressed in an ad hoc manner as parcels of land are picked off for development. This is where the Conservation Plan for the city must play a role.

Engage the Tree Sellers. Many people buy trees from Home Depot, Canadian Tire, Ritchie, etc.  Perhaps there is a role for a national environmental organization to encourage these sellers to stock and promote more native species, or at least to not stock non-native invasive plants.